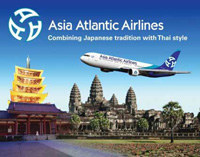 Asia Atlantic Airlines, a joint venture between the Baiyoke Group of Thailand and the Japanese travel giant HIS Group, says it will launch scheduled flights between Cambodia and Japan on Sep 2, 2014.

The carrier said it would offer three weekly flights on Tuesdays, Thursdays and Sundays aboard a Boeing 767 aircraft between Narita International Airport and Phnom Penh. Starting in October 2014, it will also offer direct flights to and from Siem Reap every Monday, Wednesday, Friday and Sunday.

“The aircraft dedicated to this route will be extensively refurbished to attract business traffic while at the same time making travel available to the tourist market at competitive prices,” the statement said.

Basic return economy fares will cost more than $1100 after taxes while business-class fares will be $2240 return. Asia Atlantic will be the first airline to launch direct flights between the two countries, beating the flag carrier Cambodia Angkor Air and even Air Asia, the region’s largest budget operator.

“There will be no first-class seats offered on the plane, but there will be economy, premium economy and business classes, providing a total of 217 seats,” said Caea Molika, a senior sales employee of HIS Cambodia Travel.

Molika added that through July 21, the airline will offer 30 economy seats to the public at $346 each.


The announcement came just a day after Prime Minister Hun Sen lauded Japanese business at the newly opened, Japanese-built Aeon Mall. As Japanese Foreign Minister Fumio Kishida, looked on, he said he had authorised the Secretariat of Civil Aviation to approve direct flights between the two countries to foster more Japanese investment.

Asia Atlantic’s new services take the total number of airlines flying into Cambodia’s airports to 24. Upgrades worth a total of $100 million began in January to the country’s two main international airports, Phnom Penh and Siem Reap, to accommodate the rapidly increasing tourism trade.

Khek Norinda, the communications director of Phnom Pehn International Airport, said the airport would be able to handle newcomer Asia Atlantic even while construction is still in progress.

“Our facilities have enough room to accommodate current flight demand and we are expanding our terminals in Phnom Pehn and Siem Reap for future growth,” he said.

“When the extensions are completed around the end of 2015, or the beginning 2016, their capacity will double to 5 million passengers.”

A Cambodia Airports spokesman said discussions with many foreign airlines were currently under way in an effort to expand air connectivity.

“The flights will provide a great opportunity for tourism exchange,” he said. “But the price for economy class (at $1146) may be too expensive for Cambodians; it’s like visiting Europe. And Japan’s visa application procedure is so strict and complicated. They ask about the properties Cambodians own and require them to have guarantors and references in order to visit Japan.”